“Imitation is the sincerest form of flattery.” Probably not the first thing that comes to your mind when talking about coaching distance runners…but here we are! This quote right here is how I was able to hit the ground running as a head coach. When I developed my first training plan, I looked at my personal lifetime of training with the mindset of “what did I like about my training?” Well…that training plan lasted maybe two weeks before it found the bottom of my trash can. It was awful, and it was awful because it made zero sense. It was like I had a simple math equation of 2+2+2, but it did not equal six. Sure it made sense, but it did not equal the needs of my athletes. Instead, I went back to the drawing board and pulled out all of the things that made zero sense in my training. My mission was to recreate the ideas that made zero sense into ideas that actually did make sense. Suddenly 2+2+2 equaled six.

Another important aspect of this is that it developed my self-confidence (very important in terms of success) as a coach because I had created something to call my own. I did not want to be the coach that used the phrase “well so & so did it and he ran sub 9:00 in the two mile” when explaining our training. It’s lazy coaching. Athletes deserve to blaze their own paths, not imitate the paths of someone else. Yes, I realize that everyone imitates training at some point in time, but it’s what you innovate from that imitation that defines you. As a coach, realize that certain aspects of a plan may not work for your athletes (or even yourself) and THAT IS OK!!!! It is our job as coaches to innovate our training plans and ideologies, so that we can tailor them to the developmental needs of our athletes.

A few summers ago, one of my best friends from high school, David, decided to run a mile to see if he could still take down the 5-minute barrier. We were juniors in college and his best time from high school was a 4:57. David may have been bigger and stronger than his high school self, but he certainly wasn’t in as good of running shape. As he describes it now, the mile was “off of no training at all” – which most likely consisted of a couple 3 or 4 mile runs per week, a few ultimate frisbee games, and some sauna sessions up in the lifeguard chair of the neighborhood pool (S/o the Shire).

The night run life was a staple for me during my college summers so I suggested we do it around 10pm to avoid the 90 degree Indiana heat. We had a few friends show up– which resulted in a pacer or two, a couple of others who wanted to see someone suffer for less than five minutes, and a few that liked their chances of seeing David leave his dinner on the track. The problem on this night was that two Carmel Police offers on patrol noticed that there were people on the track, and came to kick us off. They had received a call about some kids making some loud noises over by the high school. At this point in the evening David and I had warmed up, he had laced up his dust-collecting spikes, and he was ready to go. Thinking on our feet, we told the officers that we knew nothing of the loud noises and exactly what we were there to do, which I assume was about the last thing they expected. After listening to our explanation, we were told to hang tight as they walked across the football field and out of earshot.

What happened during that conversation on the field remains a mystery. Perhaps they called dispatch and found out who was actually making the loud noises. Maybe our lack of hesitation telling our story and the randomness of it persuaded them to believe us. Who knows? What isn’t a mystery is what happened next.

To our surprise, the officers re-approached us and told us we could stay to run the time trial. We figured that we would thank them and they would be on their way. Instead, they stayed and timed the race because they were impressed with the prospect of a sub 5-minute mile.

It was time to deliver. The commands were said and the start button was pressed on the iPhone of the timer. I assumed the lead at the front and David filed right behind me. First three laps were perfect: 74, 75, 74. He may have felt the opposite on the inside, but he made it look easy. Digging for every inch in the last lap, he held strong. 4:57. Like clockwork. He tied his high school PR and the police officers got to see a sub 5 mile.

“Lol, had the best race of my life,” David recalls. “They (officers) were probably so confused when we actually did what we said we were going to do.”  Assuming he was joking about it being the best race of his life David continued, “that night was seriously the most amazing running thing I have ever done…”

Don’t be afraid to challenge yourself in 2018. The person who holds you back the most is often yourself. 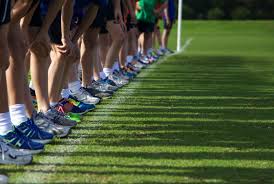 For years we have thrown around ideas on how we can leave a positive impact on the running community. Yes, we were coaching the future of American distance running, but it wasn’t enough. We dreamed of coaching sub-elites in hopes of making it big. We dabbled in the idea of starting our own running group. In our minds we were Walt Disney sketching up Mickey Mouse…in reality we were stuck at a dead end. There had to be another way. I mean coaching high schoolers is great and all, but we felt like we had even more to give. Together we had nearly 50 years of competitive running and coaching experience…that had to count for something right? Starting a blog had come across the table a few times, but we had no blog identity. Until, one afternoon the words came flying out of my mouth, “my coaching situation in Indiana was great because it was just my friends coaching our runners.” I lost all focus on the conversation at hand, pulled out my phone, and left an all caps note titled “BLOG – FRIENDS COACHING RUNNERS!!!!” (Yes, it had at least that many exclamation points.) I went home and signed us up immediately, as if someone else in the world was going to steal this idea in the next 30 seconds. I sent Tom and Andy a text that read “I just started a blog for us called Friends Coaching Runners. Start gathering ideas for things to write about. Here’s the log in info.” I did what any good friend would do…give them no chance to say no. Fortunately, like the great friends they are, they responded with affirmative all caps responses. We were starting a blog.

Now that the cat is out of the bag, I want to talk about what to expect from us moving forward. We will start by planing to push out posts on a weekly basis, covering all things related to running, and grow from there. We’ll cover personal experiences, training ideologies, running news, running tips, nutrition, and all other topics that we feel passionately about. These will be our personal opinions based on experience, and we by no means think we know everything, in fact we know very little in the grand scheme of things. We do take suggestions, so if you have a topic you would like us to talk about then let us know! We are going to start individual coaching as well, so do not be afraid to reach out if you need a coach or any running advice. If you end up finding us entertaining, then subscribe to our blog, follow us on Twitter @CoachingRunners, and send us some love!

Any athlete looking for individual coaching should contact us via the contact tab. We coach all talent levels and abilities!